Dr. Charbel is one of the top gastrointestinal specialists in Maryland and Washington DC 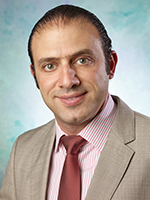 Dr. Charbel received his medical degree in 2002 from the Saint Joseph’s University School of Medicine in Beirut, Lebanon where he was born and raised. He completed his internal medicine residency in 2006 and his gastroenterology, hepatology and nutrition fellowship in 2009 at Georgetown University Hospital, Washington DC. In addition to his training in general gastroenterology, Dr. Charbel gained expertise in advanced endoscopic procedures, such as endoluminal stenting, endoscopic mucosal resection and endoscopic ultrasound. He published several articles in peer-reviewed journals and presented scientific posters at national gastroenterology meetings. After his fellowship, Dr. Charbel joined the Peninsula Regional Medical Group on the Eastern Shore of Maryland, where he established Peninsula Regional Gastroenterology Medicine. He built a successful GI practice and became the Director of Gastroenterology of the Peninsula Regional Medical Group and the Medical Director of the Peninsula Surgery Center. In addition to his clinical work, Dr. Charbel enjoyed teaching and interacting with healthcare providers in training. He joined the University Of Maryland on the Eastern Shore as a Clinical Instructor of Gastroenterology for the Physician Assistant Program, and welcomed trainees to rotate in his practice. In 2017, Dr. Charbel moved to Montgomery County and established Digestive Care Specialists, with the goal of providing comprehensive and high-quality gastrointestinal care to the community. He plans to continue his multidisciplinary approach to digestive health by working closely with established treating physicians and other healthcare providers. Dr. Charbel is a Board certified gastroenterologist, and an active member of the American College of Gastroenterology, the American Gastroenterological Association and American Society of Gastrointestinal Endoscopy. He specializes in gastroenterology, hepatology and nutrition and his areas of interest include reflux disease, colon cancer screening, pancreatic diseases and the endoscopic evaluation and management of gastrointestinal cancers. During his free time, Dr. Charbel enjoys traveling, hiking and running. He has run several half-marathons and full marathons, including the Marine Corps Marathon.